Flying and Using Drones in Alaska

One of the shooting stars in the photography business today are the use of aerial drones to do moving image and still aerial imagery. This popular device has catapulted onto the scene in the last five years with toy and inexpensive “Quad” type aerial drones with cameras of all type. Classified by flying weight drones are referred to as UAV or UAS and now require Federal Aviation Administration registration and in most cases remote pilot licensing.

The FAA’s main concern is monitoring the airspace above us in the interest of safety. To this end remote pilot licensing may soon require a new commercial license if drone photography or aerial mapping are for business purposes, or commercial uses.

Many of these restrictions can be found on FAA Apps for pilots wishing to check out the airspace or search for NOTAMS (Notice to Airmen) or TFRs (Temporary Flight Restrictions).

It seems every day the FAA issues new guidelines or new restrictions so beware.

Late last week (Oct.7), the FAA unexpectedly informed the Academy of Model Aeronautics that, contrary to earlier commitments to the organization, the agency is planning to limit all recreational model aircraft operations to 400 feet in controlled airspace – with no exceptions. Additionally, the FAA is proposing restrictions in uncontrolled airspace to altitudes that could present safety issues as well as limit some model aircraft operations altogether, according to an AMA press release on Oct. 16, 2019.

Congress specifically granted the FAA the flexibility to allow operations over 400 feet if safety would not be affected. The FAA has not provided AMA with any data that proves that member operations are a safety risk.
Fight for Flight!

The AMA has contacted its members imploring them to contact their fellow pilots and Congressional representatives and says, “As you know, our model aircraft operations do not pose any safety or security risk to local airports or aircraft. The FAA needs to honor the Congressional directive to work with AMA on these issues.” For more information see: http://amablog.modelaircraft.org/amagov/2019/10/07/fightforflight/

In Alaska flying drones is a dicey proposition especially in urban areas. With a state with over 400 public use airports and many privately-owned airstrips flying a drone safely and legally is difficult.

In the Anchorage Area there are 4 airports with Class D airspace, and the Ted Stevens Anchorage International Airport with Class C airspace, in addition to many local lakes being used for floatplanes.

The Mat-Su Valley has over 250 privately owned airstrips alone requiring contacting owners before flying any drone.

So while Alaska is a large state with 663,300 square miles of seemingly open skies, it has over 750 airports and seaplane bases combined . 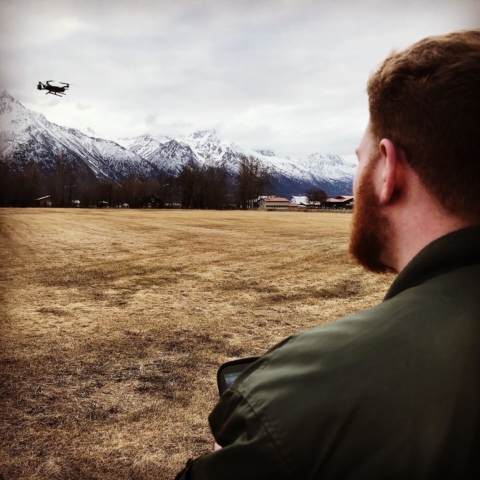